Padmashri Guru Shovana Narayan is sheer poetry and sublime joy transcending boundaries. An acknowledged and exquisite diamond of her art style, an outstanding dancer, a consummate artiste and choreographer, she is not only India's most celebrated Kathak Guru and Maestro of the present age but she has also become a living legend who has blazed a trail in Kathak. She is, intense and passionate, elegant yet vibrant, effortlessly spanning centuries of Kathak heritage as she does her dance space. She is individualistic, contemporary and ever dynamic, which make her performances mesmerizing. Her name is not only synonymous with Kathak but also with ennoblement.

Shovana is a personification of elegance, sensitivity and grace, and yet she is a storehouse of creativity, talent and a pillar of inner strength and determination, all of which succeed in endowing her with a strangely brilliant luminosity. The last four and half decades of her professional career (since 1970) have seen her mesmerizing audiences in several national and international festivals in India as well as abroad.

Exhibiting a spirit of social activism, since 1970s, she has extended the boundaries of Kathak to unchartered literary territories and sensitive social issues such as on environment, women, child and various burning social issues that have proved to be trend-setters. During the period 1993 to 1998, she pioneered the genre of dance enactments to philosophical themes with eminent philosopher, late Prof Ramchandra Gandhi (grandson of Mahatma Gandhi) that were based on the lives of contemporary thinkers and sages (Mahatma Gandhi, Swami Vivekanand, Ramana Maharshi, Ramkrishna Paramhansa, Francis of Assisi). She has also rejuvenated the narrative tradition of North-India by presenting soliloquy ("Shakuntala" by Maithili Sharan Gupt in 1996 and "Yashoda's Soliloquy" by Sitakant Mohapatra in 2000). She has also performed in several operas and tele-films.

Shovana has spearheaded and produced international collaborative works with nationally and internationally known Indian and western dancers and musicians and with special children since 1976. She has been Creative Director-choreographer of several international events such as the Opening and Closing Ceremonies of 6th International Abilympics 2003, Commonwealth Games 2010, Ter-Centenary of Guru Gobind Singh Khalsa panth 1999, classical dance segment of Golden Jubilee Celebrations of Indian Independence at National Stadium 1997. She has performed before several Heads of States and Heads of Governments all over the world.

In her career spanning several decades that has seen her mesmerizing audiences all over the world in several prestigious national and international festivals, she has been conferred with numerous awards, outstanding among which are the Padmashri Award for excellence and outstanding contribution to dance by the President of India in 1992 and yet again the Sangeet Natak Akademi award by the President of India for 1999-2000. Some of the over 30 awards won by her include Delhi Govt's Parishad Samman, Japan's Oisca Award, Rajiv Gandhi Puraskar, Bihar Gaurav Puraskar, Indira Priyadarshini Samman, Rotary International Award, International Congress of Women, Kalpana Chawla Excellence Award, Dadabhai Naoroji Award and CNN IBN's Guru Shishya Award, 2012, Guru ML Koser Award, 2013, Guru Deba Prasad Award 2013, Art Karat Award 2014, Bharat Nirman's Social Responsibility Award, 2014 & Rotary SHREYAS Award 2014.

Shovana's keen interest in research has led to the discovery of eight Kathak villages in Gaya district of Bihar. She has authored several (12) books and numerous articles including a research paper on the contribution of Delhi to performing arts heritage in INTACH's bid for Delhi as a Heritage City to UNESCO. She is a central figure in ongoing discussions in the cultural field as participant in countless symposia and seminaries. She is also a visiting lecturer to several Universities in India and abroad. She has guided research students for award of PhD degree in the field of dance.

Shovana is a guru of standing whose disciples are adorning the world of classical dance. An organizer too, she also holds two annual festivals 2 well known annual Festivals for the past several years.

Charting new paths, Guru Shovana Narayan is perhaps the only example of a person who has relentlessly pursued two parallel exacting professional careers, achieving distinction and great heights in both. Shovana was an acknowledged and reputed young Kathak dancer of the country when she entered the civil service (Indian Audits & Accounts Service, 1976 batch) from where she retired (superannuated). An outstanding officer enjoying high credibility and integrity, she served in challenging assignments such as in the Ministry of Water Resources, Ministry of Finance, Rajya Sabha, BSNL, as the Asst Returning Officer in Presidential Elections of 1992, as DG of iCISA (International Centre International Centre for Information Systems and Audit) in CAG of India and as the Special Director General, Commonwealth Games 2010 Delhi where she conceived, organized and delivered the spectacular Opening & Closing Ceremonies with thundering success.

A keen educationist, she has served/ is serving on the Governing Board of several Colleges, Institutes of Higher Education including IIT Delhi, IIM, Indian Institute of Finance, Trustee of IGNCA (Indira Gandhi National Centre for Arts) and on Al Gore's The Climate Reality Project India as well as several leading national and international schools.

Guru Shovana Narayan is a classical example of a true Kathak, multi-faceted and dynamic, and presents a challenge to today's spectator. Her life, her works, her dignity and demeanour have made her a role model and peer for millions of girls of the younger generation of today.

As a silent Social activist and crusader:

Exhibiting a spirit of social activism, she has extended the boundaries of Kathak, through new panoramic vistas of interpretations of Kathak's traditional repertoire or through new choreographies, to unchartered literary territories and sensitive social issues such as on environment, women, child and various burning social issues that have proved to be trend-setters.

Her far reaching deep concern for environment saw its translation in a dance ballet "Dishantar" way back in 1983 when the idea had not even germinated fully in the consciousness of the world. This saw another impassioned production "Dushasana Bas Karo" in 1990 set to Dr L.M. Singhvi's poignant poem. To the idea of Dr.L.M.Singhvi, the well-known jurist, she presented a unique ballet on Human Rights, "Muktilekha" in 1989 which was a path-breaker of its kind. Shovana's spirit of introspection and social awareness saw her staging unknown perspectives and new dimensions of few incidents of the Ramayana in "Kab Aogey Ram" in the year 1984. Her deep concern for society and its problems especially on women's and social issues, were evident through thought provoking creations such as "Apni Beti ke Liye" on the works of Sarveshwar Dayal Saxena in 1995, 'Avadhi ka Antim Din' on the work of Kusum Ansal, 'Anuttar' based on contemporary explorations of mythological stories in 1996, "Sannata" ("Ballad of Freedom") in 1998 of Bhabani Prasad Mishra, 'Mamta', "Mujhe bhi to Jeene Do" (1999) on the emotional hell through which a mother and a girl child has to go through, and many more. Her fearless attitude was witnessed in the astounding staging of a traumatic burning issue of incest at a traditional Kathak dance Festival through "Toota yeh Vishwas Kyon". It was through her evocative stage rendering of "Charagh-e-Dair"in 1997 to Urdu translation of Ghalib's Persian verse by Ali Sardar Jafri that Ghalib's ode to Benaras became known to all.

Giving dance interpretations to the Philosopher within:

With eminent philosopher, late Prof Ramchandra Gandhi (grandson of Mahatma Gandhi), she pioneered the genre of dance enactments to philosophical themes and burning social issues based on incidents in the lives of contemporary sages such as:

The philosopher within her also saw extremely emotive and successful translations through dance of:

In her works with Dr. Gandhi and in the rendering of the Pavan Varma's poem 'Yudhishtar and Draupadi' with Sunit Tandon (theatre actor), here again she displayed her boldness by being the first dancer to present dance enactments with texts rendered in the English language, a trend which has now caught on.

One of the foremost and most celebrated disciples of the maestro, Pt. Birju Maharaj at Delhi, Shovana was initiated into Kathak as a child at the tender age of not-yet three, by the well-known dancer-actress of yester-years, Sadhona Bose at Calcutta followed by intensive training under Guru Kundanlal-ji at Bombay. Her style represents a crystallisation of combined techniques acquired from the sophisticated elegance of the Lucknow gharana and the rhythmic precision of the Jaipur school. Her approach also bears the stamp of a mind influenced by the cultures of the world, projecting an individualistic attitude to the dance form that brings new pictures to the mind.

Shovana has emerged as a sensitive and dedicated guru, successfully imparting not only the skills of Kathak but also recognising the innate strength of each student performer and encouraging the growth of their individualties. A staunch believer in the Gurukul-parampara, Shovana imparts to her disciples not only details of Kathak but also her own sensitivities and message of love, righteous practices and trust, which makes an artiste humane. Here again she has successfully redefined the Guru-Shishya tradition and related it to the modern society. Her dedication as a guru of excellence can be seen in her disciples who have become acclaimed young dancers of the country. She imparts training in Kathak at her Asavari Centre of Dance situated in Delhi.

Shovana's canvass does not end in the medium of dance. Her palette contains other media, including films operas, soliloquys, etc:

Recognition came her way early by way of awards. Her creativity and contribution to the art has been admired and appreciated through numerous awards such as:

The Path Breaker & the Role Model

Shovana Narayan is a classical example of a true Kathak, multi-faceted, successful and dynamic, and presents a challenge to today's spectator. Her life and her works have made her a role model and peer for millions of girls of the younger generation of today. The younger generation look up to emulate her as she has set high standards and been a trend-setter in more ways than one. Besides her extraordinary achievements and pioneering works in the field of dance, she is the first professional dancer who successfully pursued a parallel full-fledged career in the Indian Audit & Accounts Service, entering it through an extremely competitive civil service examination in 1976. In addition, she is highly qualified for she is yet again the first professional dancer who holds degrees of Masters in Physics, two MPhils and a D.Litt (HC). In an atmosphere where family relationships are under strain, Shovana again has set an example of having a successful long-distance inter-continental marriage to a career Austrian diplomat, Dr Herbert Traxl, who served as his country's Ambassador in several countries since 1983 (they have been married since 1982) besides being a caring mother to their son, Erwin Ishan Traxl. 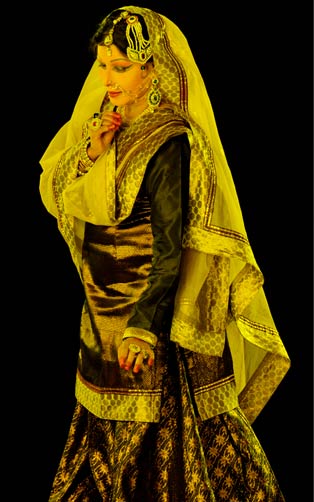 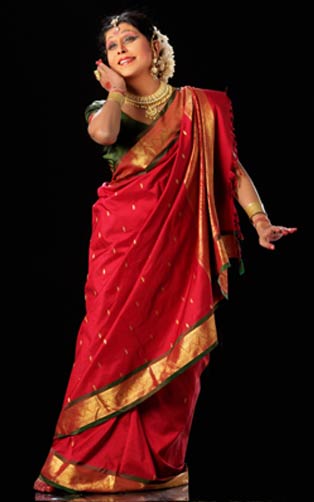 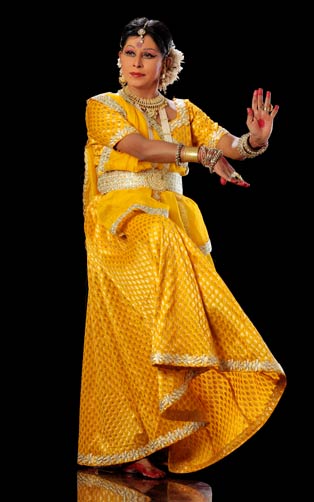 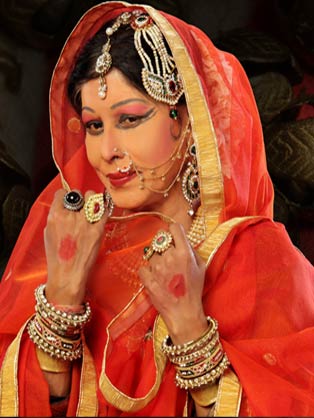 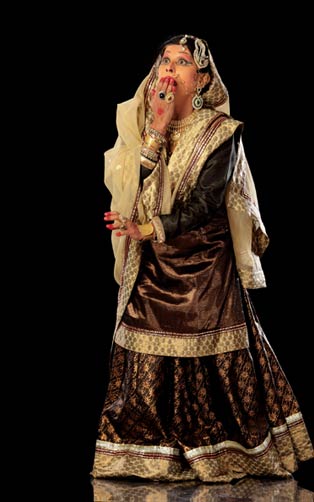 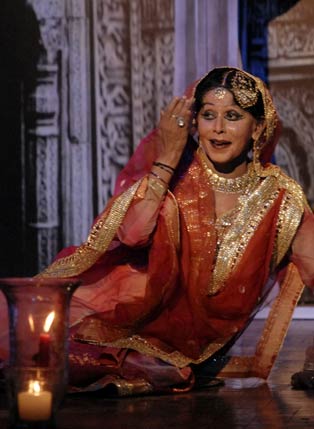 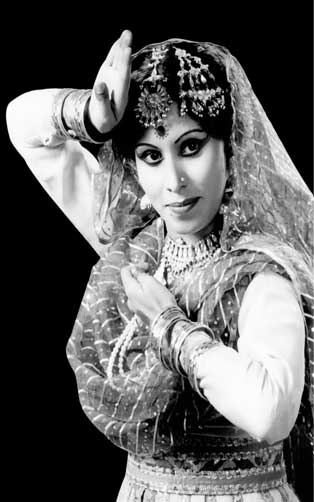