Yearwise Summary of Items and Productions

"Shunyata" With her undying faith in communal harmony through inter-faith dialogue, the crusading spirit of Shovana yet again sought to draw attention to this important aspect in a torn and violence ridden society, through her performance "Shunyata"in fusion with Grammy Award winning Buddhist Monks of Palpung Sherabling Monastery. Always fascinated with Lord Buddha, his life and philosophy led Shovana in the past (since 1979) to perform several episodes from his life, such as Yashodhara, Sujata, Sound of Emptiness and Harmony among others.

"Motilal Nandi" - from Khapchhada ie Nonsense Rhymes of Rabindranath Tagore It was a challenge when Shovana Narayan was requested to translate and interpret, through dance one of the 'nonsensical' verse from the Khapchhada series of Rabindranath Tagore. Since it was 'nonsensical', the challenge of interpretation of this form of 'hasya rasa' was enormous. Going through the poems, she found 'sense' in the 'nonsense' for the 'nonsense' stories and verses had identifiable characters and simple understandable plots. Taking up the challenge she chose the piece on Motilal Nandi, a character that all could identify with. How often in all our lives, learning of grammar and vocabulary have eluded us and left us frustrated. So was it with Motilal Nandi!

"Jehanara" Through the story of "Jehanara", the crusader spirit within Shovana Narayan and her sensitivity saw her once again drawing attention to women and social issues that are no different today than it was in yester years. Indirectly, through this ballet, questions being asked were:
a) However powerful one may be, but is empowerment at hand to follow one's heart?
b) However 'developed' the world may be, but is cruelty of society and of the powerful not visible at every step? Is this not visible even today? Such and many more questions ..................

Kadambari: The Poet's Muse (2012) The long association of Shovana Narayan's parents with the extended family and works of Nobel Laureate, Rabindranath Tagore evoked a natural interest in the life of this extraordinarily talented visionary who became a trendsetter in several ways. In this voyage, the mysterious Kadambari, sister-in-law of Tagore, became a source of fascination and resulted in this dance enactment.

Throughout Tagore's works, the influence of Kadambari, is unmistakable and is also evident. Four aspects of her influences were undertaken that find resonance in Tagore's works: her love for nature; her love for tradition and yet an inquiring open mind; her compassion and understanding of the common man's woes, desires (emanating from her own simplistic background); her unfulfilled desire of motherhood, parting of parent and child and the mindset of society. These four influences became the pegs around which the dance ballet revolved.

Even the song "Tobu mone rekho", written in 1888, four years after the suicide of Kadambari, his sister-in-law, and which was sung by Tagore himself in a recording shortly before his death, indicated his life-long emotional relationship with Kadambari and her never forgotten influence on him. Appropriately, the dance ballet production opened with this old recording of the song in Tagore's voice.

"Bidrohi" (2012) of Kazi Nazrul Islam with Mahbub Hassan Saleh, Deputy High Commissioner of Bangladesh What is it that has forged a bond between Bangladesh's National poet Kazi Nazrul Islam and Shovana Narayan? Did the great Bengali poet and musician's intense spiritual rebellion against oppression and injustice reflected in his poems find echo in the graceful but intense activist spirit of Shovana? Apparently so, for on three occasions, Shovana has been seen performing to Nazrul's most famous poem 'Bidrohi'. In the third staging, she teamed up with Mahbub Hassan Saleh, Deputy High Commissioner of Bangladesh in Delhi to celebrate the 90th year of the epic poem 'Bidrohi' by Kazi Nazrul Islam, introspecting on the various shades of rebellion that upsurges within man, some silently, some visibly, reflecting a panorama of emotions.

"Shuoranir Shaad": Tagore's short stories have explored the canvas of human psychology in all its hues. In pursuit of happiness, keeping the unwelcome sorrow at bay, man is constantly chasing 'maya'. However this is merely mirage in the ocean of the great desert of life, as the desire to imitate and possess what others have, stemming from envy, consists in seeing things never in themselves, but only in their relations, from whence arises shame at being humiliated for our behaviour. Experience holding an invisible mirror reflects the true inner self of who we really are and the realization that happiness does not lie in the satisfaction of desires. To belittle, the person has to be little. That which causes through trials, emerges strongest. A gem shines only after enduring great friction as does steel emerge strong after passing through several tests in fire. Out of suffering have emerged the strongest souls. "Shuoranir Shaad" was introspection by Shuorani, the Queen of Happiness through her encounters with Duorani, the Queen of Sorrow. The story is an in-depth inquiry into the relationship between desire and envy, imitation and original, happiness and sorrow.

'Ladli - Do Anubhav' By ruthlessly killing the female foetus right in its sacred womb itself, we are guilty of killing a being - a being that would have nourished and perpetuated mankind; a being of unassailable divine fertility; a being that is symbol of strength and replenishing compassion; a being of ubiquitous fragrance, panoramic beauty and bonding equality! She, Ladli, too is life and has the right to live. She too is a being, equal to her brother. She is one who holds half the sky. So then why deny her laughter, her pains, sorrows and joys?

'Ladli - Do Anubhav' drew attention to the raging malaise of female foeticide. It dwelt on the cry of the foetus asking for her right to live, love, experience pain, sorrow, joy and happiness. Who are we then to snatch this away from her?

"Winter Reise" (The Winter Journey) in Salzkammergut Festival at Gmunden, Austria The opening of the Salzkammergut Festwochen on 13th July 2008 at the picturesque Austrian town Gmunden's City Theatre featured a most unusual rendition of Schubert's evocative piece 'Winter Resise' featuring the famous Indian Kathak danseuse, Padmashri Shovana Narayan in concert with well-known cello artiste Yvonne Timoianu and piano artiste Alexander Preda. With this performance, fearless and bold Shovana yet again proved the universality of expression and that art knows no barriers.

"Kunti ki Vinati: Thread for the Pearls" Yet again, contemporary perspectives into mythological episodes formed the core of "Kunti ki Vinati". This poem, sought to delve into the unchartered hidden recesses of Kunti's mind and understand her dilemma and anguish. Her sons were pearls that till hitherto was strung together in a chain of maternal love and bonding. Would their wives further this bondage or encourage disintegration? Could her statement uttered unknowingly that it was Draupadi that her sons had brought, become an advantage? Could Draupadi become the much needed string for further strengthening the bond between the brothers that was especially required in this dark hour of the approaching Mahabharata war? The poem provided a fascinating insight of the complex working of a human mind!

"Indradhanush": Programme for Bihar Flood Relief Shovana organised the first endeavour of artistes of Delhi for helping affected families of Bihar Flood. She along with her group rendered emotional support to the Kosi flood affected victims. River Kosi â€“ also known as the River of Sorrow - has always been well-known for rapid and frequent avulsions of its course and the extensive flood damages it causes.

"The Ragpicker Children" Moved by the plight of the children that Shovana saw in Prayas, "The Rag picker Children" saw birth. Through the dance production, several questions were asked relating to circumstances that led to such a life. In its treatment, two rag picker girls narrated their story: (a) Violence in the home with a drunken father and several siblings that needed her to work too to augment the meagre earnings of her mother; (b) the abandoned orphan girl who escapes daily to work as rag picker than be forced into prostitution racket by her self-appointed guardians.

The Deer & The Spear Based on a poignant poem, this evocative dance production brought out the mindless and ruthless pain that accompanies hunting, while simultaneously drawing attention to the plight of the female specie. 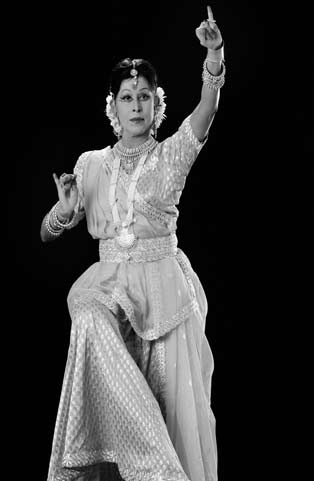